A very warm welcome to all of you!

My name is Birgit and the idea creating this website has been creeping up a few times but I’ve never taken the time to take the next step: make it happen!

Because it’s about cancer and the impact it has had and still has on my life. It’s personal and every now and then emotional.

But it’ll be positive as well and that’s the main reason why I’ve now decided to share my experience.

You might now decide to carry on reading this because somebody told you to do so (for whatever reason…). It might as well be you’ve been looking for a something written by somebody who has suffered from cancer and wants to share feelings, thoughts and whatever happened in this particular time.

Whatever the reason: Nice to meet you!

CANCER has joined my life a few times so far.

A word which is scary and creates fear and anger at the same time.

A word which has developed several different meanings but it’s

A diagnosis which changes your life… (at least it changed my life a few times)!

I got diagnosed with breast cancer in 2003 for the first time. Friday the 29th of May 2003: Had a shower early in the morning and noticed something in my breast and knew it’s cancer. It’s difficult to describe but somehow my body told me “this isn’t ok… you have to react”! But my first reaction was thinking about various scenarios. Had pictures in mind with people without hair undergoing chemo treatment. Saw myself in the same situation…

Called the practice first thing in the morning but needed to wait three days for the appointment. Three days which made me cry. So much fear…

My doctor checked the lump and felt the same. “Yes, it’s a lump. And yes, it’s been right to see me straight away. But don’t worry. We’ll sort it out. I’ll arrange a few more tests and we’ll sit down to see what’s needed.”

“But, lucky you, you’ve discovered it at an early stage!”

Didn’t feel lucky at all.

I’ll share some more details about my first treatment but like to start with my second journey which started in March 2016:

Actually… it started in November 2015 when I’ve noticed some changes. My energy level hasn’t been as high as normal. I’ve struggled to re-charge my batteries after an exhausting shift in our bakery. And I’ve noticed changes in my breast which I’ve tried to ignore for a while. Not that I’ve been very good in ignoring but I’ve managed to not take myself serious enough in order to look after myself and see a GP to get it checked.

In March 2016 I’ve developed this funny feeling it might be serious and I need to act.

And I’m sure many of you will confirm you’ve got the feeling as soon as you notice “something”.

However: Having gone through scans and checks my journey started with chemo from May to August 2016, followed by a mastectomy in October 2016. And the treatment combined with fear has changed my life. In many ways…

I’ve lost the ability trusting myself.

And I don’t know about you but I’ve lost the ability to live a normal life if that makes sense.

On the 31st of May my first chemo started “the journey”. I’ve been a bit nervous and wasn’t sure what to expect. Having heart a lot about side effects and everything around the devil CHEMO I’ve decided to wait for whatever happens.

But my main decision has been to take it serious in terms of “this will help!”

I’ve decided chemo would be my partner to fight against any cancer cell in my body. Against the fear of suffering from cancer and whatever comes with it.

When I got home after the treatment I thought something would happen – but it didn’t! When I got to bed in the evening I’ve started talking to my body “whatever is happening is happening to support you fighting cancer”. But at the same time I’ve given commands such as “don’t damage or destroy any cells I need and don’t touch my brain (having heard about chemo brain and other stories). I’ve told every drop of the cocktail to focus on cancer cells only “Don’t even dare to touch any other cell than cancer cells!”.

I know it sounds a bit unusual or odd but that’s the way I’ve managed to get through this .

I felt sick and couldn’t stand eating various types of food. I’ve lost my taste of anything sweet (still not very keen on sweets). Couldn’t eat any fruit for nearly a year – just started having fruit every now and than.

Lost my nails (finger nails once – toe nails more than twice and some are still falling off).

Lost my hair – but didn’t care that much as it meant the treatment works.

And maybe just as an additional information I’ve lost my older sister to breast cancer just fifteen months before.

Somehow I’m looking at whatever happens in positive way (or at least I’m trying to do so) and therefore I’ve taken it as a second chance: “Darling you need to review and change your life!” “there is a better way enjoying it!”

But it felt like I needed to learn a few lessons.

So I’ve started treating myself for every step: For every chemo treatment I’ve managed to cope with I’ve treated myself with a rose. Went to a garden centre of my choice and bought what’s been waiting for me. And the big advantage it: it’s a long-term reminder as they are all blooming throughout the summer this year and reminding me of what I’ve been trough.

But that hasn’t been enough I’m afraid. After the chemo and the mastectomy I’ve gone down into a depression. Felt like I didn’t deserve surviving. And as I’m writing this it’s the first time I find the words for how I felt all the time.

Yes: I felt like I’m not good enough to be a lucky one!

But “lucky me” I’ve managed to get over it. Three years survivor now!

I’m a strong believer that whatever happens in life happens for a reason.

Even cancer happens for a reason…

My name is Birgit Hehn and I’m living in Devon, United Kingdom.

My best friend is Cookie! Our dog… she just makes me smile every single day! 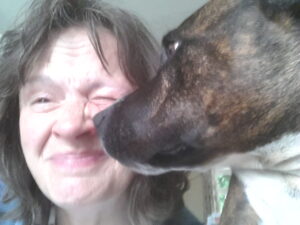 END_OF_DOCUMENT_TOKEN_TO_BE_REPLACED

Eat but make sure you enjoy what you are eating Drink but be aware it the essence of life Love (from the bottom of your heart) but make sure you love yourself first (which for me – at least the moment – seems to be so difficult) Simple rules or guidelines, easy to follow but …